Intention is a funny thing.  When we “set an intention,” we take committed action (as set out in our blog post, Intention #5, http://www.mclarencoaching.com/intention-5/).  And the results of a clear intention combined with committed action are remarkable.  Sometimes it works.  Sometimes it doesn’t.  But it is so much more effective than the alternative – not setting an intention, not taking committed action, wishing, hoping, and taking what comes.  There does sometimes seem to be an almost magical element to intention-setting.  Is that because clear intention makes us see things differently and take different action?  Or is it something else?  I don’t know.  I don’t think it matters.  It works:

“Since I have embraced executive coaching with Cami, the idea of Intention has become a regular part of my life, personally and professionally.

I remember one day, in particular, when my daughters and I were running late for school. To be honest, that happens quite a bit, but that’s another discussion. My children go to two different campuses, so running late has a domino effect for us. Worried that they would both be late, I declared my intention… ‘I intend to get my girls to school on time today.’ I didn’t know if it would make a difference. As I saw it, I only had control over one thing…when we left our house…and I blew that. I couldn’t control the street lights or the traffic or any of the other things that happen when you are driving. But I put it out there and I asked my girls to put it out there, too. If the three of us shared the intention, maybe…just, maybe…I would get them there on time. It couldn’t hurt, right?

When I got Daughter 1 to school on time, we let out a Woohoo! One down, one to go. Now for Daughter 2. It usually takes about 5-10 minutes to go from one campus to the other. We had about 5 minutes. There was only one way I would get Daughter 2 to school on time…We had to hit every green light and there had to be almost no traffic. Even though I had set my intention, and my daughters had joined me in it, I didn’t really believe it was possible at that point. There was just too little time. Even so, I refreshed my intention with Daughter 2… ‘I intend to get my girls to school on time today’…and off we went.

Did we make it on time? Yep. Much to my very pleased surprise. 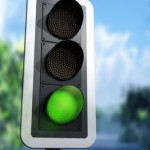 I couldn’t control the traffic lights. I couldn’t control the traffic flow. I could, however, set my intention. That one act made me more focused on what I was doing. I believe it also compelled me to do it in a way that increased my success. I didn’t speed out of panic, cursing everything that slowed me down. Instead, I focused my mind and trusted what I put out into the universe. That day, it worked beautifully.”