You may have read my blog last week about a guy who inspired me with his enthusiasm for holding a sign on a corner in Sacramento.

Today I am writing about another man I saw. About 2 blocks away from sign guy, is Fruitridge and Freeport – an intersection I cross every day to pick my children up from school. I was sitting at the light waiting to make a left turn. To my right, standing on the sidewalk was a seemingly homeless man with a shopping cartful of stuff. What drew my attention to him was not the cart, but his three-legged dog. The dog was not on a leash, but stayed nearby. I am always so interested in the 3-legged animals because I think about how different they are from us. I think about how we pity ourselves when things happen we don’t like. And it appears from watching animals that they don’t pity themselves much. They seem to move on. This dog was running aro 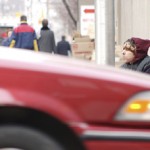 I then saw to my left on the other side of the street, another man. What I noticed about him was that he seemed physically unstable. He seemed wobbly. I was afraid, watching him, that he was going to step out into traffic. He seemed disoriented. He was youngish, probably around 30-35.  He looked like he had been beat up. He had scratches and bruises on his face. I vacillated between noticing him and looking away because I was afraid he would step out into traffic. But he did not. Ultimately the light changed in his favor and he walked over toward the side of the street with the “homeless” man. Sadly, that’s just a day in Sacramento. It’s what I saw next that is the reason for this blog post. The “homeless” man reached into his cart and pulled out what appeared to be a pie from a grocery store and he offered it to this younger unstable looking fellow. Then the traffic came and I didn’t see anything else.

It made me think this “homeless” man, if he was in fact homeless, was a lot like the 3-legged dog. He didn’t seem to pity himself. His gesture seemed to me one of compassion and abundance. He had little and yet he was willing to give it away. And I thought, not for the first time, “we get to choose.” I thought how often in my own life, I start to pity myself and wish for things to be different and feel sad about fairly minor difficulties. Then I look at people like him and I think, “he’s choosing”. He’s choosing an attitude of ownership for his life. He’s choosing to give. He’s choosing to help from a place where many would think all he needed was to be helped.  He’s choosing to help from a place where many would choose to feel sorry for themselves.

And so my question, once again is, “What attitude am I choosing in this moment? and what other choices do I have?”